Microsoft .NET is the Most Preferred Web Application Framework

NET is the one of most loved framework with a among developers. ( Stackoverflow survey "Web frameworks and technologies")

Its robust nature and future deployment perspectives make it one of the best application development platforms. 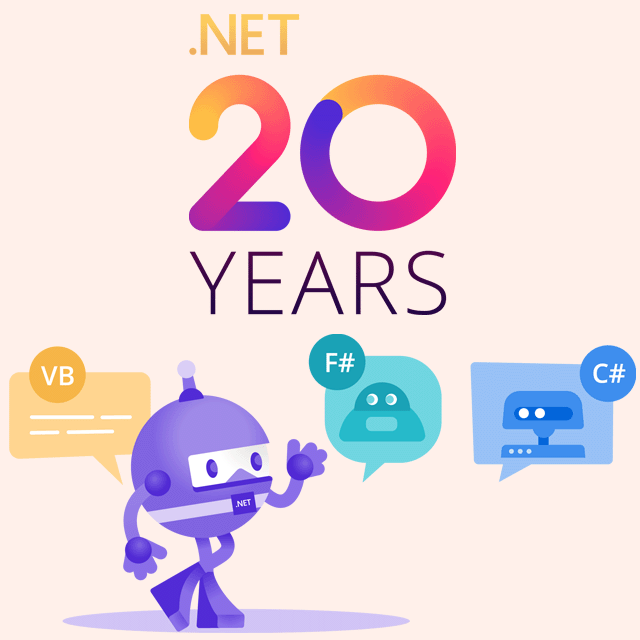 This blog post discusses the features and benefits that make Microsoft .NET the most preferred web application framework.

Here are 3 types of .NET technologies that helps a developer in the development process –

NET is based on an Object-Oriented Programming Module. OOP is an application evolution model that breaks down the software into smaller manageable pieces.

It divides the data into data fields and describes the objects’ behavior through the declaration of classes.

OOP makes the code manageable, responds to recurring issues, and is easier to test. As a result, it reduces necessary programming and provides smaller coding for developers.

Visual Studio is a Microsoft IDE that is used to build, debug, and publish applications across all platforms, including Android and iOS.

In 2014, Microsoft announced a dramatic shift in the way .NET exists by presenting .NET Core, a new cross-platform, cloud-friendly, and open-source version of the framework. .NET Core made it to a release in 2016, becoming the main technology to consider for new .NET projects. Gradually, Microsoft started porting existing services to work with Core. Some that didn’t receive official ports, like Windows Communication Foundation (WCF), were substituted by altenatives sourced from the community.

Microsoft continued moving towards “transparency between the product team and the community,” and open-sourced Windows Presentation Foundation (WPF), Windows Forms, and WinUI frameworks in December 2018.

In May 2019, the company announced the big release that would tie the ecosystem together: All .NET elements were supposed to be bundled in the .NET 5 development platform. While changes were made to the schedule because of COVID-19, the .NET 5 unified development platform was finally introduced in November 2020. The successor to .NET Core 3.1 and .NET Framework 4.8, .NET 5 puts order into the fragmentation of the .NET world and provides a lot of features to build applications on Windows, Linux, macOS, iOS, watchOS, Android, tvOS, or using WebAssembly. The platform comes with new APIs, language features, and runtime capabilities. Also, .NET 5 includes ASP.NET Core, Xamarin, Entity Framework Core, WPF, WinForms, and ML.NET.

Advantages of the .NET Framework

NET is based on object-oriented programming (OOP). OOP is a development model for breaking down software into smaller pieces that are easier to manage and combine. OOP compartmentalizes data into objects, i.e., data fields, and describes objects’ behavior and contents through the declaration of classes.

A modular structure helps define the behavior of objects and their interactions without managing object inner attributes. OOP simplifies programming by making the code manageable, easier to test, and respond to recurring issues. It also eliminates unnecessary programming and generally means less coding for developers. .NET makes it possible to reuse code and components, save time, and – subsequently – the cost of development.

Caching means keeping data in a temporary storage place to call it faster when needed. The stored data is the result of an earlier information request or the duplicate of information stored in other places that would take longer to retrieve.

The caching system in .NET is robust and simple to use. It’s also designed to be extensible. The Object Cache class allows developers to create a custom cache implementation to be used for improving the performance and scalability of Windows client and server applications.

An Integrated Development Environment (IDE) is a single product for programmers that makes application development easier by providing all the tools needed to write and test software.

Visual Studio is a Microsoft IDE used for building, debugging, and publishing applications across all platforms, including Android and iOS. Visual Studio is integrated with .NET and provides the features of a language-specific environment.

The key features of the Visual Studio IDE:

The all-purpose IDE, Visual Studio 2022 was released in November 2021 along with .NET 6. The roll-out is the first 64-bit version of the IDE itself and is stuffed with useful features. Among other things, Visual Studio 2022 contains IntelliCode — special capabilities that use Machine Leaning to complete chunks of code for you, recognize repeated edits, and suggest fixes.

.NET Core is a cross-platform .NET implementation that allows the code to run on macOS, Windows, and Linux. Unlike the original .NET framework – which is not completely open – .NET Core has a fully open-source code that ensures that a wide engineering community can continuously contribute to its development.

If you’re writing in C#, F#, or Visual Basic, your code will run on each of the compatible operating systems. This enables companies to reach the widest variety of platforms staying within the .NET ecosystem. At the same time, the cross-platform design ensures that the whole .NET community with a large pool of different engineering skillsets shares the experience.

One of the important .NET Core features is flexible deployment. It can be installed as a part of your application or require a separate installation. The modular design contemplates including all the dependencies you need. The deployment itself is as easy as copying a folder.

Another benefit is that you can have multiple .NET Core versions running side by side on the same machine to cover different projects and seamlessly perform deployment tasks.

Since 2016, the .NET ecosystem has been enhanced with a large class library called .NET Standard. It’s based on the number of base class libraries for .NET Framework, .NET Core, and Xamarin. These are used to work with common functions such as graphics rendering, database interaction, and manipulations with XML documents. The .NET Standard library greatly simplified developers’ work.

Prior to .NET Standard, a programmer had to redevelop an application or a library for the new platform and then distribute all the updates across various platforms. Currently, the library supports all dependent libraries across applications. However, you should check version compatibility to successfully leverage .NET Standard.

It bears mentioning that aside from all I outlined prior, .NET is an older development platform with years under its belt. Despite its age, it managed to become a mature and robust framework with the addition of .NET Core and Xamarin. In the past years, these platforms have undergone multiple updates (with more planned), which made them faster, more reliable, easier to use and above everything else – more flexible and secure.

Integrating .NET in your business functions can help you overcome a variety of challenges. One of them being security – what should be a top priority to all companies. Afterwards, would be the option to transcribe legacy code. Because many older web products available were written in ASP and ASP.NET, developers can come across loops and twists they don’t understand. Thanks to the latest .NET updates, you can now transcribe legacy code into C# or F# – making it easier to read and understand.

Additionally, .NET now facilitates easy maintenance and implementation of new features. Since it is an open platform technology with a large library and community available, enabling a Rapid Application Development is more than doable.

.NET is designed for platforms that plan to scale-up and is flexible enough to be adapted for enterprise-scale infrastructures. Through .NET you can develop cross-native applications for iOS and Android using Xamarin and develop IoT, AI, Machine Leaning and Big Data solutions.

We have a vast and complex .NET experience, with full-time strong .NET developers available, all of them seasoned with Agility and ready to embrace your challenges, no matter the size or the industry.

Contact one of our team members and get started today.